Now that all 32 teams have played three games, our sample of every team's play script signalling is becoming more meaningful. As I said in the first post about play script signals, looking at how teams script their first handful of plays can give us insight into how each coaching staff views its optimal run-pass split. The beginning of the game always offers neutral game scripts because the score always starts at 0-0. So, after three weeks, I looked at the first 15 plays for each team over the course of three game, giving us a sample of 45 plays to look at. I then calculated the EPA per play  and the team's passing rate on those 45 plays and plotted the relationship to get a visual on how teams are approaching run-pass splits to start and their general effectiveness on those scripted plays: 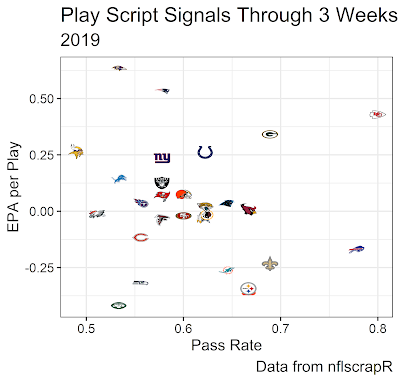 Kansas City and Buffalo stand alone in regards to their passing rates, posting rates of 80% and 77.7% compared to their non-garbage time rates of 72.4% and 69% respectively. Considering these teams are both 3-0, it should not be surprising that their pass rates fall as the game goes on. Teams that are winning run the ball more. Kansas City has been much more effective than Buffalo on scripted plays, generating on average about .43 EPA per play to Buffalo's lowly -.17. These figures place Kansas City as the third most lethal offense in the league thus far on scripted plays and Buffalo 26th. With that being said, its hard to not be encouraged how aggressive Buffalo is putting the ball through the air. I talked early about the Bills' commitment to building an analytics staff this off-season and the team's decisions so far indicate that the coaching staff is listening to it.

Green Bay has been the fourth most efficient team on scripted plays and boast the third most passes through three games on these plays. The Packers pass rate dips to about 64% overall when filtering out garbage time, but we have seen Green Bay play way more conservatively after building leads against Minnesota and Denver the past couple of games. Arizona is actually throwing at a lesser rate for their scripted plays compared to the rest of the competitive portion of the game. On scripted plays they are throwing on 2 out of every 3 plays, while that figure creeps up to a league-leading 75.5% for non-garbage time plays. This makes some intuitive sense; the scripted pass rate indicates Arizona wants to throw the ball a ton and since they have been playing from behind for much of this season, that rate should be expected to increase.

Looking at some of the other 3-0 teams around the league, the Patriots have around a league average pass rate on these scripted plays but have been the second best according EPA, which, when accounting for the Patriots early schedule (blow outs of the Steelers, Dolphins, and Jets) should not be surprising. Dallas, hiding behind the Redskins logo, is clustered around the majority of the league in both pass rate and EPA per play. This offenses first real test of the season will come Sunday night against the Saints.

The Vikings have been the fifth best team on these scripted plays (.266 EPA per play) while passing at a minuscule rate of 48.9%, the least frequent in the league. Those who espouse the merits of pounding the rock might cite this as evidence that Minnesota's off-season commitment to running the ball is paying dividends. I would respond with saying that even though this 45 play sample is useful for looking at team's play calling tendencies, its still too small of a sample to draw conclusions regarding offensive effectiveness. If the Vikings keep running the ball at this rate to open up games, I would expect some regression.

The Eagles are known to the public as being on the forefront of NFL analysis, yet they are passing the ball on just 51% of their plays to open up games, the second smallest rate to the aforementioned Vikings, with middling results. Much has been made of the dropped passes by Nelson Agholor and the injuries to Alshon Jeffrey and DeSean Jackson, but the Eagles cannot afford to start games off slow after their 1-2 record through three games. Philadelphia is at its most potent when Carson Wentz is making plays; being conservative at the beginning of the their upcoming game against a good Packers defense could be costly in such a pivotal game.

The Ravens have thrown the ball on the 4th fewest instances but have added a league-leading .63 EPA per play on scripted plays, almost 20% better than the second-best figure of the Patriots. I would be shocked if there is not a good deal of regression in this department; thus far they have played a weak set of defenses in Miami, Arizona, and Kansas City.

Finally, I wanted to point out the outrageous ineptitude of the Jets and Seahawks. The Jets are passing the ball 53.3% of the time with an EPA per play of -.41. This level of conservatism and lack of offensive firepower has been characteristic of non Peyton Manning led Adam Gase offenses. Its going to be a long year for gang green. The Seahawks have the fourth-lowest EPA per play and 7th lowest pass rate. Seattle has one of the best quarterbacks in the entire league yet insist on handing the ball off almost 50% of the time on both scripted plays and non-garbage time plays overall. Its no wonder Russell Wilson seems to be always bringing Seattle back from a multi-score deficit the last couple of seasons. One can only wonder how good this Seattle offense could be if their coaching staff was not calling plays like the Vince Lombardi led Green Bay Packers.