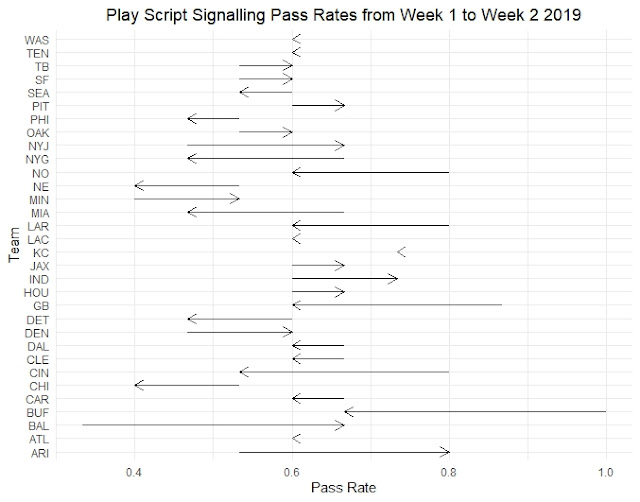 Baltimore against a more competitive team threw the ball at a more reasonable rate to start the game. Buffalo, after inexplicably throwing on its first 15 plays, regressed closer to the league average pass rate in its second game against the Giants.

The Giants, in that same game, lost some of the promising gains they made in their play script last week against Dallas. While the Giants have been very successful running the ball to start the year (to the tune of a success rate over 50%, tops in the league), it has not mattered because for much of the young season they have trailed by multiple scores. There have been calls for the Giants to give the ball more to star running back Saquon Barkley. Given the game scripts thus far, that would be a terrible idea. Running the ball when losing by multiple scores is not a +EV strategy no matter the success rate. If you run the ball well, you burn a lot of clock and when trailing by multiple scores time is of the essence.

The Bengals, despite a hobbled Joe Mixon, ran the ball much more to start the game. Last week I talked about how Green Bay's script ran counter to the off-season narrative of wanting the establish the run. This week aligned more with that story line. Of course, a quick lead made it so running the ball was more palatable, nevertheless its an interesting development to monitor next week. New England had no problem running the ball against the woeful Dolphins. Chicago was one the of run-heaviest teams to start its game against Denver despite the close spread, which would generally indicate we should expect a lot of neutral game scripts. This is a manifestation of Mitchell Trubisky's awful start to the season. After trading up to draft him over Pat Mahomes and Deshaun Watson, I am sure the Chicago brain-trust is not pleased feeling the need to open up a close game with a 40% pass rate.
Posted by CarmenC at 5:44 PM