Generally in the NFL, a team has a script of plays they want to run to start the game. The run-pass tendencies can sometimes give us insights into how teams view the best way to mix running and passing the ball. Inspired by a viz from Kevin Cole of PFF after week 1 I looked at the pass rates for every teams' first 15 plays in 2019 and compared that rate to their pass rates from the first 15 plays during the 2018 season. The following plot shows those changes: 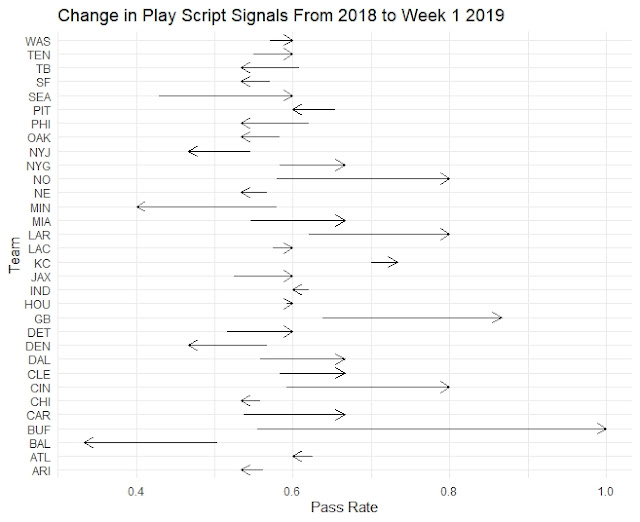 Looking at the plot, you can see that in week 1 the Bills had 15 straight dropbacks to start the game. We have heard that the Bills have been building out one of the larger analytics departments in the league and this seems to jibe with that notion. Green Bay, despite all of the talk of becoming more balanced this off-season, dropped back on 13 of its first 15 plays against Chicago. The Giants, surprisingly, were very aggressive throwing the ball to start the game against the Cowboys in week 1. Overall the Giants threw the ball a ton, only giving Barkley 11 carries in the game. This, of course, was dictated by the game scripts, but nevertheless this should be a mildly positive trend for the more analytically inclined Giants fans.

Minnesota coach Mike Zimmer,  like Green Bay, talked a lot about establishing the run this off-season. The Vikings play script signals suggest they are going to do just that. Baltimore barely dropped back to start the game against Miami despite the fact that the Ravens and Lamar Jackson eviscerated the Dolphins through the air. Finally, one more interesting trend in play calling was with the Jets. We heard that head coach Adam Gase was not too keen on the acquisition of Le'Veon Bell this off-season. Despite this sentiment, it does seem that they tried to give him the ball early.

Overall, most teams threw the ball more to start the game than they did in 2018. This is consistent with the overall trend of teams throwing the ball more as teams become more privy to the relative efficiency of a pass versus a run.