Offensive Holding Through Week 2 of 2019

One of the big off-season story lines regarding officiating was the emphasis on calling offensive holding penalties. One area that the referees sought to pay more attention was holding on the backside of running plays. With that being said, it is natural to wonder if the referees were going to follow through with this plan. We know that the NFL has instituted rule changes in the past few seasons to maintain elevated levels of scoring. Such initiatives included more strict enforcement of roughing the passer and defensive pass interference. So, I looked through the play-by-play data to compare the amount of offensive holding penalties called through two weeks of every season since 2009. The following chart shows the results: 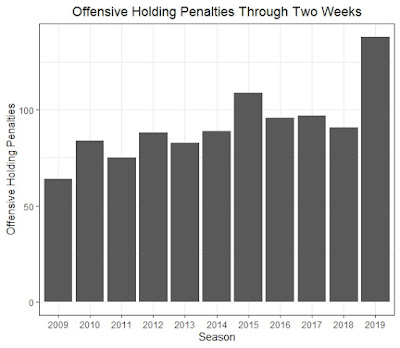 Sure enough, this decree by the referees has led to an influx in offensive penalties through the first two weeks. After an emphasis on nerfing defense the past few seasons, defensive players and coaches must be letting out a collective sigh of relief. If the present rules are meant to favor the offensive side of the ball, the least the league can do is hold offenses accountable for blocking within the guidelines of the rule book. To take this one step forward, I looked at the number of holding calls by play type: 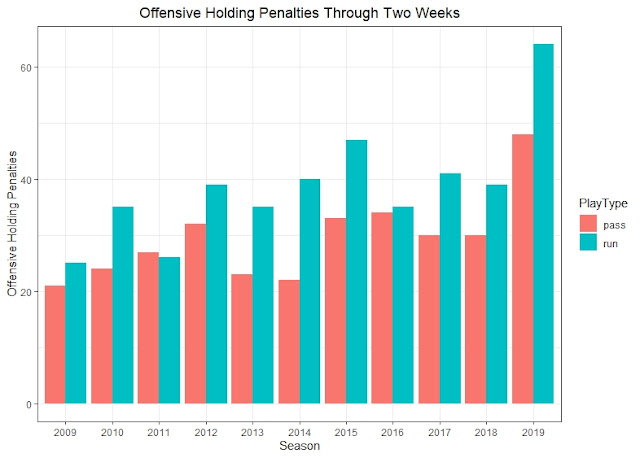 Another feather in the cap of passing truthers. Not only is passing more efficient but it also yields less offensive holding penalties. This should be noted by offensive play callers who insist on running the ball on early downs. Offensive penalties are extremely costly; they set an offensive back by 10 yards. Such a penalty can effectively kill a series. Finally, I took a look at the amount of offensive holding penalties by offense this year through the first two weeks (this does not include the Thursday night game between Tennessee and Jacksonville): 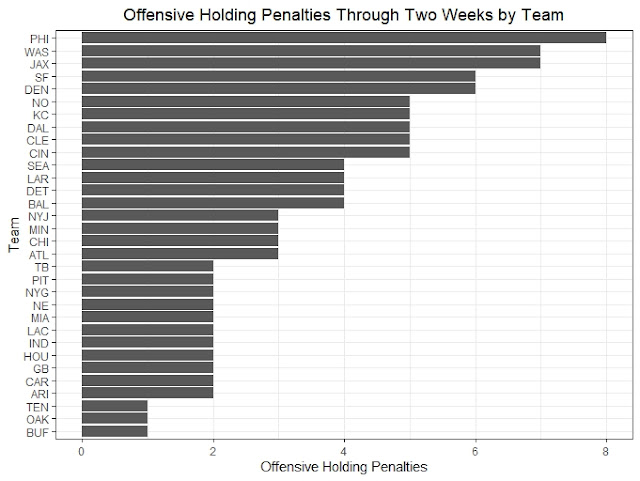 There does not seem to be much of a correlation between number of holding penalties and offensive efficiency thus far in the season, but note that two weeks worth of penalties is a tiny sample on the team level. Philadelphia, San Francisco, Dallas, and of course Kansas City are four of the most prolific offensive teams in the league and they find themselves at the top of this leader board. If they can clean up some of these mistakes, this can lead to even more successful series for those offenses. Furthermore, Oakland, Tennessee, Carolina, and Green Bay are all at the bottom and they have been woeful on offense thus far. These offenses do not have much work to do with regards to their discipline, however if they want to remain relevant for the rest of the season they need to look for improvements elsewhere.
Posted by CarmenC at 3:42 PM