Play Sequencing Results by Down

How NFL teams sequence plays is instrumental in their offensive success. Each play call in football is its own little game: the offense picks a play based on what it thinks the defense will do and what it thinks the defense will expect. The defense calls its play based on what it thinks the offense is most likely to do. A football game is not just one play, however, but a sequence of plays where the result of the previous play affects what the offense decides to call for the play at hand. Thus, I thought it would be a useful exercise to look at all of the two play sequences in the NFL since 2009 by down to see which sequences were most effective for the offense based both success rate and EPA per play (EPA stands for expected points added and is an estimate of the change of an offenses expected points for a given play from one play to the next).  Success rate is defined as the percentage of plays with a positive EPA.

I filtered out all sequences that happened on different drives because intuitively the last play on one drive should not have much of an effect on the first play of the current drive. I also only considered run and pass plays (i.e. no special teams) and filtered out garbage time (where the win probability at any point exceeded 85% or was less than 15% for the offense). Now, let us look at the data. Note, the first play listed is the play at hand while the second play is the play that preceded it (pass-run means a pass play preceded by a run play). The first chart shows the number of two play sequences for each of the four downs: 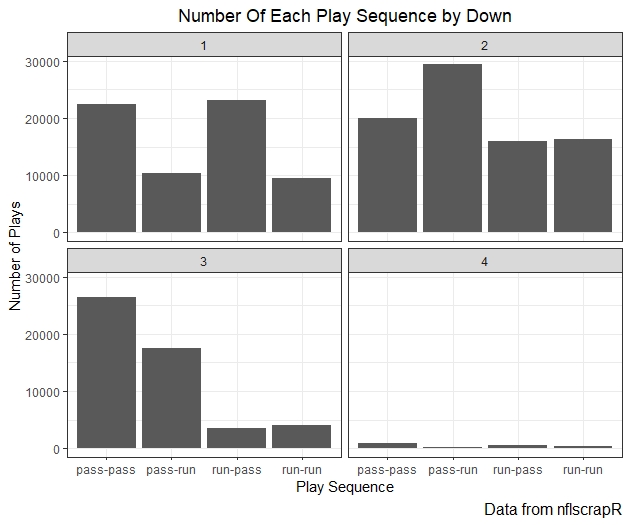 Now, let's look at the success rates of each play sequence by down: 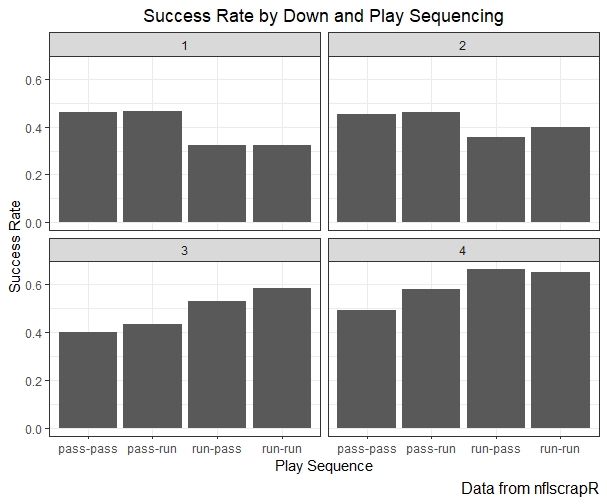 Based on analysis done in the past, we should not be surprised that throwing the ball on first and second down, no matter the previous play call, is the most lucrative play calling strategy. Based on the disparity in success rates, however, teams are still using sequences with running plays far too often relative to passing plays. On later downs, we see that sequences involving rushes tend to be more successful. Again, we have seen the analysis that running the ball is effective when a team gets close to gaining a first down, and considering third and fourth downs often have shorter to-go distances, running the ball on those later downs should be more effective. This is especially true on fourth down, where if a team is running or throwing the ball in a non-garbage time situation, that team is probably close to the sticks. One more note about fourth downs is to focus in on the success rates of all four two play sequences. The success rates across the board are large relative to other downs which indicates that teams should be very aggressive with their play calling on fourth down. The only sequence with a success rate of less than 50% on fourth down is pass-pass, and if a team is passing on fourth down following a pass on third down, then that team is probably not especially close to the first down marker.  Still, on all rushes and passes in the NFL the last ten years, the league average success rate is about 44%, so no matter the play call on fourth down or the one preceding it, going for it yields a higher success rate than average.

Finally here is a similar plot to the one above, except this time with EPA per play instead of success rate: 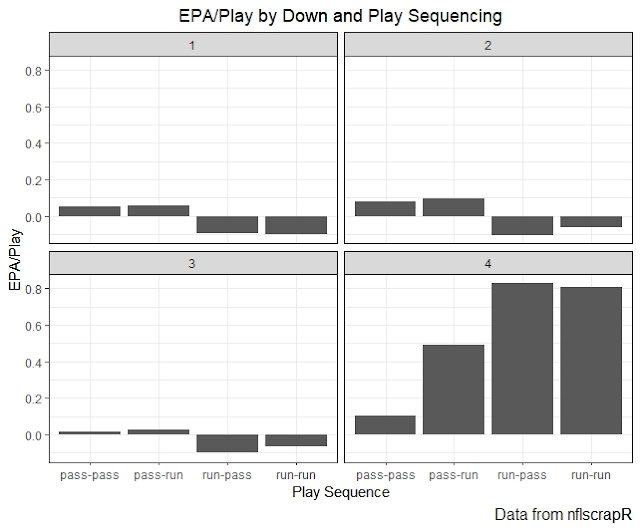 This plot confirms our prior suspicions: Go for it on fourth down more and throw the ball on early downs. Looking at third downs, based on EPA per play, teams in general should be throwing the ball more. The success rates for running the ball on third down are a bit more robust than those for passing compared to the EPA per play results, but generally if a team is running the ball on third down, that team is close to the sticks. However if that run fails, considering you are close to a new first down, the expected points drop is rather large between a punt and a first down, assuming the next play is a punt. If is throwing on third down, it is likely third and long so the expected points on that drive is low to begin with and an in-completion will therefore have a low EPA. So on most third downs, all else being equal, throwing the ball is way more effective, which should not be a very controversial opinion.