We are now, almost, one quarter of the way through the season (this post is being written before the Monday night game between the Steelers and Bengals). I figured it would be a good time to take stock of some of the most prolific and lousy offenses around the league in two distinct situations: 1st down and second and long (defined as greater than five yards to the first down marker) and 3rd and long. These situations are vital to the overall success of an offense. Running plays on third and short or forgoing 3rd down together leads to productive drives. Offenses that find themselves calling plays facing a 3rd and long consistently will find it difficult to string together enough plays to put points on the board. Furthermore, these plays yield low success rates (to the tune of 33.67% in 2019). Granted, good offensive teams should generally perform better on these plays. However teams that have been more efficient on these plays than those on early downs (success rate on early downs with over 5 yards to go is about 40%) should expect their offenses to regress as the season goes along. So, lets take a look at the data (as always I filtered out garbage time where the offensive team has a win probability of greater than 85% and less than 15%): 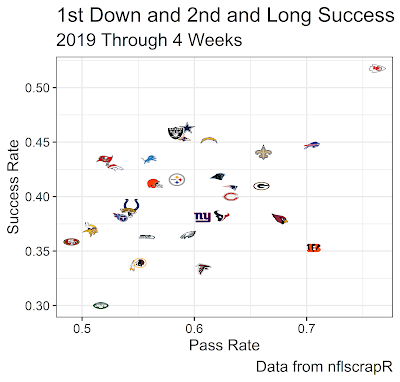 Kansas City has been far and away the most successful offense on early downs and more than yards to go. Not only are the Chiefs the most successful, but they have been throwing at a rate of 76.3%, by far the most in the league thus far. Under the tutelage of first-time head coach Zac Taylor, the Bengals (pending Monday night) have thrown at a rate of 70.5% albeit with much less success than their counterparts in Kansas City. However, given Taylor's reputation as a budding offensive coach having breathed the same air as Sean McVay for the past two seasons, this is a positive development. It is also worth mentioning that, like in most other situations, the Cardinals and Bills are also throwing the ball at some of the highest rates in the league. Even after Buffalo's putrid performance against the Patriots, the Bills still have been one of the best teams on these early down plays. Unsurprisingly given their expectations to start the year and their early schedules , the Cowboys, Ravens, and Chargers have all been among the best on early downs and long thus far. What is surprising, however, is the fact that the Raiders and Dolphins have been similarly as good. Given that the Dolphins are regarded as the worst team in the league and the Raiders are often cited as one of the worst, I was shocked to see how well they have played in this pivotal split. Given their offensive talent, I would expect both to negatively regress a bit as their non-garbage time sample grows, but even then we should be expecting some positive offensive regression overall if they can continue to perform even moderately effectively.

On the flip side, it would not be a honest discussion of the league's offensive landscape without mentioning the brutal incompetency of the Jets. They have by far the lowest success rate on these early down plays and one of the lowest pass rates. Call it a Gase special. The Falcons despite employing Matt Ryan and Julio Jones, have also lagged behind the rest of the league in this metric. The Falcons have had a rough start to the year, but given their personnel this figure should improve. Nevertheless even modest improvement will not get them into the upper half of the league. This may be a lost season for Ryan and co. and the last season with Dan Quinn at the helm in Atlanta. Jay Gruden's tenure in Washington looks to be on a similar collision course with fate as Quinn's in Atlanta. Washington does not boast the same firepower as Atlanta, but the recent comments and rumors surrounding Gruden and the selection of Dwayne Haskins hint that Gruden and the front office are not on the same page.

The Vikings, despite two great offensive showings against Atlanta and Oakland, have been one of the worst teams on early downs. Their lack of success can be attributed to their putrid performances against Green Bay and Chicago. They continue to run the ball at one of the highest rates in the league in all situations. When they jump out to early leads, this is not much of an issue but against more stout units like those of their division rivals, they have put up putrid performances. Given that their early leads against Atlanta and Oakland led to a lot of garbage time, it is no surprise that their performances against the Packers and Bears are weighing their numbers down. San Francisco, who was on a bye this week, has gotten off to a hot start. They have not done a great job taking care of the ball, but on a per-play basis have been one of the best offenses in the league. With that being said, the Niners performance on early downs is a bit concerning. If they continue this level of efficiency on 1st and 2nd and long, I would expect some heavy negative regression to visit the Bay Area.

Now, looking at third and long success rates, what are some offenses due for regression? 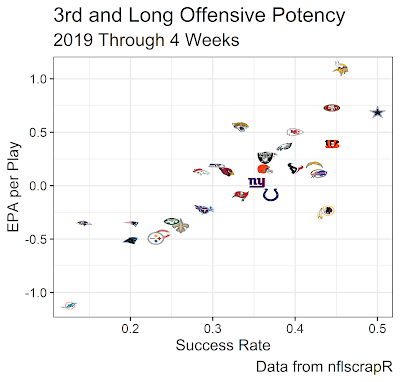 Miami loses all its aforementioned advantages on early downs on third and long. Much of their offensive woes can be attributed to not being able to extend drives. Miami is posting a 12.5% success rate and is, on average, losing more than one expected point per play on third and long! Amazing. The Ravens also have been dreadful on third and long; they have been merely bad based on EPA per play, but their 14.5% success rate is almost Dolphins-esque. Given Baltimore's productiveness on early downs, I would expect its offense to see some positive regression and remain among the top ten units in the league.

The Jets have been the worst offense on early downs and one of the worst on third and long...yikes. Washington has been very successful on third and long but only better than the Jets early in their series'. Given how they looked yesterday against the Giants, I would expect things to only get worse. Both the Vikings and Niners, whose offensive ineptitude on early downs screamed regression, are hanging their hats on third and long. Another reason to expect both of these offenses to decline in effectiveness as the season goes along. Finally, Dallas shows up again as one of the best in this split. The Cowboys early down success indicates that this offense is for real, but I would expect them to slow down a bit as their schedule gets more difficult and they regress on third and long.