The Debut of Daniel Jones

As all followers of the NFL knew, today was the debut of controversial first round pick Daniel Jones. Much of the NFL analytics community (including myself) criticized Giants general manager Dave Gettleman for choosing a quarterback of his statistical record with the 6th overall pick. He was quoted as saying "After the three series I watched, I saw a professional quarterback. So that's when I was in full-blown love." Needless to say this quote did not go over well. However, with Daniel Jones having made his first start, we can now actually begin to analyze what will undoubtedly be the most important move of the Gettleman era in New York. We saw Jones play well in the preseason, but that was mostly against backups. Now, we can finally see what he looks like against real NFL defenses.

The Giants were trailing for most of the game, so the fact that they were so willing to throw the ball should not be too much of a surprise. With that being said, I was surprised with how aggressive they were even on early downs. On 25 first down plays, Daniel Jones threw the ball 68 percent of the time. On 21 second down plays, he threw about 62 percent of the time. And on 14 third down plays, he threw the ball every time. Success rate is defined as the percent of plays that yielded a positive expected points added value. So we can look at these throws by down by their rate of success. These passes led to a 32 percent success rate on first down, 33 percent on second down, and 50 percent on third down. The early down success rates were a bit lower than one would like to see (for reference, the overall success rate for all run and pass plays is about 43 percent). What was so impressive about Jones' work on third down is his throws yielded a 50 percent success rate, but due to the Giants struggles on early downs, he was facing on average 7.57 yards to go on third down. Now, we are talking about 14 plays so we should not jump to any meaningful conclusions. But, it is better to succeed in these situations then to flounder. This is not to say he is going to maintain this level of efficiency for the rest of the season or the rest of his career, but this was definitely a nice way to start his career.

One of the positives for Jones coming into the league was his athletic profile. He was able to show off his considerable athletic gifts in the combine and this aspect of his game should offer some level of excitement for Giants fans after watching the immobile Eli Manning for the last decade and a half. Jones scrambled 3 times in this game with two of those scrambles ending in a success. These scrambled averaged 2.13 expected points added including the game winning touchdown, so they proved to be pivotal in the outcome of the game. Again, I cannot stress enough that we are dealing with tiny samples here but we know that quarterback scrambles tend to be high value plays. If Jones can parley his athletic gifts into generating high EPA plays with his legs, this gives him some margin for error as a passer.

Finally, I wanted to look at how far down the field he was throwing the ball in each direction of the field. The following plot shows his distribution of air yards, defined as the distance the ball flies down the field with respect to the line of scrimmage, for throws to the left, right, and middle of the field: 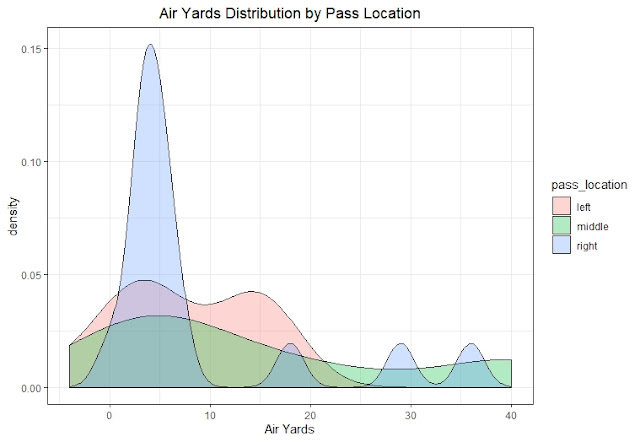 Besides a few deep throws, most of his throws to the right were targeted between 0 and 10 yards down the field. His throws to the middle were more at the intermediary depths of 10 to 19 yards down field. And his throws to the left were pretty evenly distributed to all areas of the field. Overall he was willing to let the ball fly a bit, a departure from the dink and dunk passes that seemed to define the Giants offense the last few seasons.

Overall, this was an encouraging debut. As a Daniel Jones skeptic going into the year, I am not ready to call him the savior of the franchise. We are talking about 1 regular season game, so it is important to not overreact. However, if this game is any indication of what type of player he is going to be as a pro, Giants fans should be excited about what Jones is capable of not just this season, but for the remainder of his tenure. in New York.
Posted by CarmenC at 7:08 PM