Reflecting on the First Couple of Games of the Rangers Season

With the first couple of games in the books, the Rangers find themselves with four points in hand a mighty plus 5 goal differential (I kid of course). Going into the season, any rational Rangers fan was expecting the following threads to play out throughout the year: the team would be more competitive but not playoff caliber (i.e. about an 85 point team), the top two lines would provide some firepower, the team would have no depth, and despite the addition of Jacob Trouba, the defense would be a train wreck. While our preseason expectations for the team should not change a bit after two games, I thought it would be interesting to look at how the team and certain players have fared thus far.

The Rangers overall goal differential has been buoyed by a hot start for the powerplay. At five on five, the team has sported a 55.56% goal differential, which over the course of an entire season would make them one of the most potent even strength teams in the league. However, in these same minutes they have produced a 36.55% xGF per Natural Stat Trick (xGF is expected goals for. Expected goals are calculated based on the location of the shot, the time between events, and the previous event type). This is a dreadful figure that no team would produce over the course of a full season. That being said, it is fair to be a bit skeptical of the team's start to the season. It cannot expect to be on the playoff bubble the entire season if they continue to get speed-bagged at 5v5.  Note that the first two contests were against Winnipeg, a team that has been pegged for a drop-off after an exodus of talent, and Ottawa, a team that is making no attempt to ice a competitive roster. Most of the team's even strength struggles came in its opening night game against the Jets, who we should expect to be a good deal better than the Rangers. Also, one last note, for a team with one of the youngest rosters in the league, the Rangers have yet to record a chance off the rush.

The driver of the teams success has been the powerplay led by the aforementioned Trouba, Mika Zibanejad, newcomer Artemi Panarin, Chris Kreider, and Pavel Buchnevich. The powerplay has produced 3 goals in just eight and a half minutes of ice time. Even better, they have put up 10.75 xG per 60 minutes, the third best mark in the league. This is unsustainable, but for the first time in many years, Rangers fans could be in for a top half of the league unit with all-world play-maker Artemi Panarin feeding Zibanejad and co.

Looking at 5v5 play on the player level, the first line of Panarin, Zibanejad, and Buchnevich has been the only line performing even with some level of mediocrity. The trio has put up 41.82% shot share with a 44.85 xGF% mark. Let me be clear, these are not impressive figures in the slightest. However, without any of these players on the ice, the team has produced a measly 30.53% xG share. Offense has not been the top line's problem, looking at their shot chart thus far, they have individually generated some high danger chances: 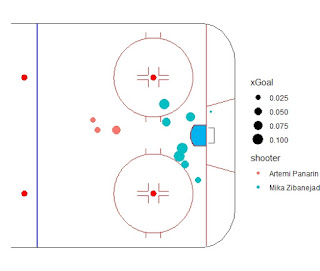 Buchnevich has yet to record a shot at 5v5, but Zibanejad has already had quite a few chances right  around the net. The unit needs to clean up play in the defensive zone, but given half of this sample has come against the potent offense of the Jets, there is absolutely not reason to panic (and that is without considering we are looking at just two games).

All of these figures will regress as the team plays more games, but concerns over the team's depth should not subside. The second line, headlined by the second overall pick Kaapo Kakko, has been abysmal. The line, which also includes Kreider and Ryan Strome, has a putrid 19.04 xGF% through two games. Many Rangers fans going into the year have concerns about the organization's infatuation with Strome after forgoing a cheap buyout of his contract. The line is clearly not as dreadful as the results would indicate thus far, but the fears regarding the decision to play Strome in the top-six have not been assuaged. Looking at the one ice expected goals for figures for the team highlights the second line's horrid start to the season: 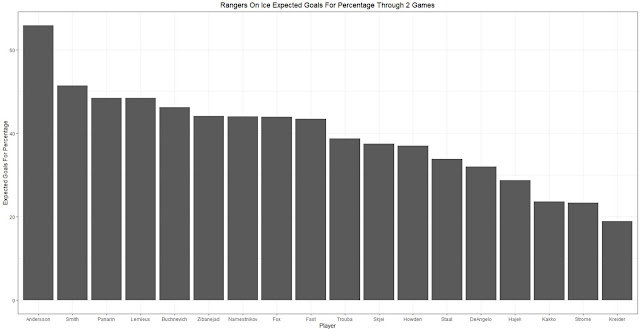 Interestingly enough, Lias Andersson has had the team's best on ice results to start the year despite playing the fewest minutes at 5v5. Granted, he has gotten 50% offensive zone starts, so Quinn is giving him some of the easiest minutes on the team. However, considering the second line is off to a horrid start and the number-one goal for the season is furthering the development of the young core, I think it would be worth it to give Andersson some run with Kreider and Kakko. If Quinn really does not trust Andersson to play in the top six, at least try Namestnikov as the pivot between Kreider and Kakko. Namestnikov has had success in the past playing with superstars Steven Stamkos and Nikita Kucherov. He by no means drove that line when the three were played together in Tampa Bay, but there is some evidence that he can thrive playing with high-end talent.

The defense was not expected to be impressive and nothing in the first two games should change that. Most of the group is hovering around 45% in 5v5 shot share, with the exceptions of Adam Fox (50% exactly) and Marc Staal (who looks like he is skating in mud, is at 38.81%).


Overall, I would say, despite the four points, the Rangers have not looked great to start the year. The team's defense at even strength has been extremely underwhelming and besides the play of the top line, the offense has not been much better. However, the powerplay looks to be improved with the additions of Trouba and Panarin. I do stress how little two games means when evaluating a team. No one should be jumping to any conclusions. There are still 80 games left to be played. We will see if the Rangers will start to look more competent at 5v5. No matter how good the powerplay can be (and I am skeptical they can be more than a good unit given the talent on hand), the team needs to pick up its play at even strength.

Data via Natural Stat Trick and Moneypuck.com
Posted by CarmenC at 2:27 PM