Anyone who even tangentially follows baseball is aware of the narrative that Clayton Kershaw struggles in the playoffs. Over the course of his career, Kershaw has produced a 4.43 ERA in 158.1 playoff innings, a far cry from a 2.44 ERA in 2274.2 innings pitched in the regular season. This dichotomy has turned baseball fans all across the country into armchair psychologists. Many say he cannot handle the pressure associated with the crucible that is October baseball. I, for one, am not a psychologist by education and therefore have been skeptical of such a narrative. I think there is a misconception regarding player ability, probability, and distribution of outcomes. We often expect a player to always perform at a certain level based on what they have done in the past. In reality, a player's true talent, which we can never exactly suss out but instead estimate based on past performances and aging curves, represents the player's 50th percentile outcome in a given start, string of starts, or seasons. Player performance should be looked at as a distribution of outcomes; sometimes a player performs at his 5th percentile outcome or sometimes he blows us away and performs at his 95th percentile outcome. All else being equal, however, we expect the bulk of his work to be somewhere in between 10 percent worse and 10 percent better than his elusive true talent. To suggest that there are not outside forces that can affect how a player performs would be foolhardy, but I also find it difficult to speculate on those outside forces because we, as fans, cannot possibly know which directions those forces pull along a player's distribution of outcomes.

That brings me to Kershaw. Kershaw is the best pitcher of his generation; he has, over the course of his career, produced an ERA 57% percent better than league average (adjusted for park and league context) according to Baseball Reference. In his most dominant stretch, from 2013-2017, he produced an adjusted ERA that was 92% better than league average. This is one of the most dominant stretches of pitching in baseball history. So why has his postseason performance been so disappointing? Well first, let me stress, given his regular season performance, his postseason outcome has a been a bit disappointing. In a vacuum, a 4.43 ERA is not something to sneeze at. It certainty is not great, but definitely not terrible. What stands out is the ramifications of some of his playoff blunders, chronicles by Ben Clemens over at FanGraphs this morning.  2013 against the Cardinals and 2016 against the Cubs stand out in particular. We fail to realize that he seems to have disappointed so often because he has pitched in so many meaningful games. It should not be forgotten how many great teams he has led to October. Still, we are left wanting more.

On Wednesday Kershaw, with the Dodgers up 3-1, gave up two homeruns on consecutive pitches that proved to be fatal to the Dodgers season. Granted, he was put in the unusual position, for him, of coming to pitch in relief, despite the fact that Dave Roberts had Pedro Baez, potent against right-handers, to pitch against Rendon and Adam Kolarek, potent against lefties, to pitch to Juan Soto. Nevertheless, in 2019, he gave up three runs in an inning on three separate occasions: a start on June 24th, a start on June 29th, and a start on August 31st. He threw a shade over 180 innings the entire year. Here is his distribution of runs allowed in an inning this season: 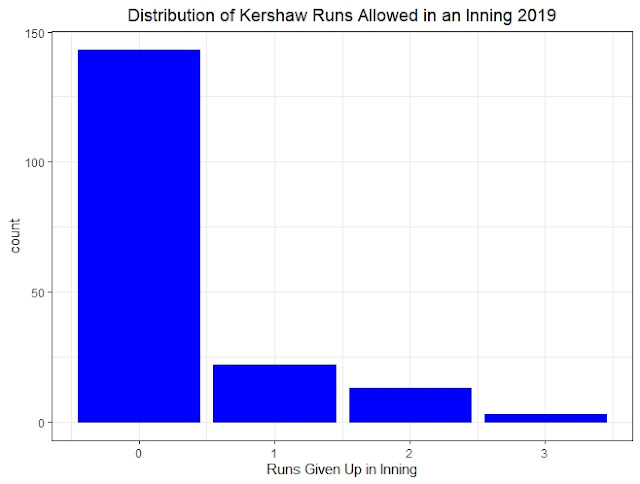 What can we take from this? Was he just unlucky? Let's round his innings total count up to 181 innings, which means he gave up 3 runs in just 1.66% of his innings. Or is there something more there? If he has been so potent in the regular season, maybe these blow-ups in the playoffs have something more behind them. I guess what I am saying is, after watching Kershaw for all these years,  I do not know. Maybe he cannot overcome the anxieties associated with pitching in October. Or maybe one of the brightest stars this sport has ever was just unlucky on the some of the sport's biggest stages. All I know is, as a baseball fan, I wish we did not have to wonder.
Posted by CarmenC at 3:48 PM