Week 7 was one of, if not the, most lopsided weeks to date. Only three games (pending Monday night's tilt between the Jets and Patriots) were within one score. Despite the relative sleepiness, let's take a look at the slate that was: 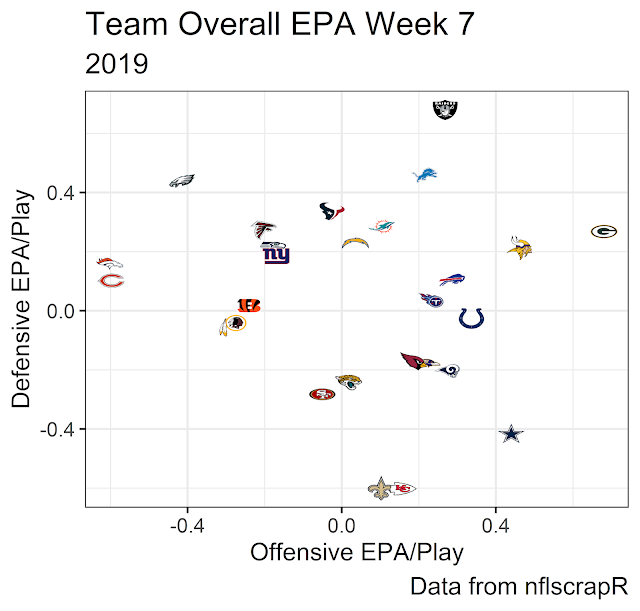 Remember, negative defensive EPA is good, thus you want to see your team in the bottom right corner of this chart. The best performances of the week were turned in by the Cowboys on Sunday night, the Saints at Soldier Field, and the Chiefs against the Broncos, despite missing Pat Mahomes for the entire second half. Consequently, we see the Bears, Broncos and Eagles at the top left of the chart. The contest in Chicago was marked by the return of the often-criticized Mitchell Trubisky and he did not disappoint. The Bears put up the second worst offensive mark of the week. There is going to be a lot of heat on Doug Pederson and company as they travel to Buffalo. In a prime-time game they laid an absolute egg in Jerry World, not known to be one of the more intimidating environments for opposing clubs. Take a look at the Eagles play-calling tendencies: 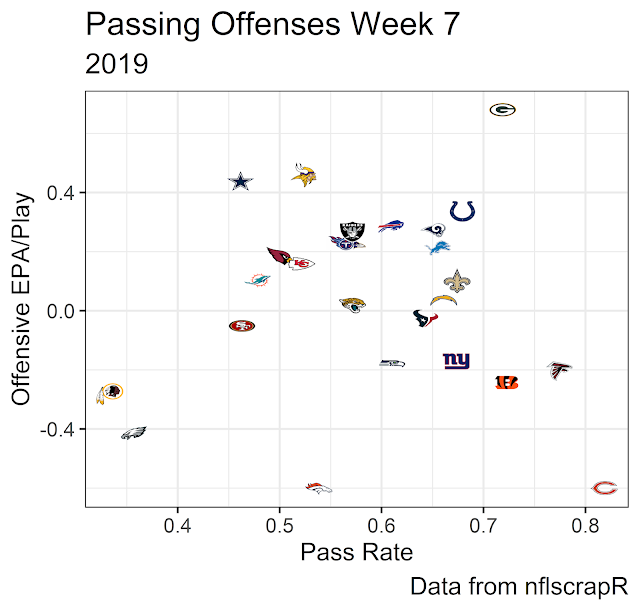 Despite getting speed-bagged the entire night, they ran the ball at the second highest rate for the entire week! Only Bill Callahan bested them (Case Keenum threw 12 passes the entire game despite trailing for much of the second half. As controversial as this may seem, I am confidant in claiming this franchise is a mess). Matt Nagy was not looking to ease Trubisky back into the game at all, the Bears threw the ball at the highest rate in the league in week 7, which was a bit surprising even when you consider the game scripts. Aaron Rodgers and the Packers were humming in their game against the Raiders. They were extremely aggressive throwing the ball trying to expose a rather porous Raiders pass defense. The Lions and Vikings participated what turned out to be the most prolific shootout of the week. For the third straight week, Kirk Cousins turned in one of the most impressive performances in the entire league. The Vikings were winning for much of the game, but given the play of Cousins and Diggs the last couple of weeks, you would like to see them be even more aggressive attacking teams down the field, for they had the 8th lowest pass rate of the week. The Dolphins looked only bad yesterday with the help of Josh Allen and the Bills offense.

I also looked at how teams performed on early downs in week 7, to try to tease out some of the noise associated with third down play: 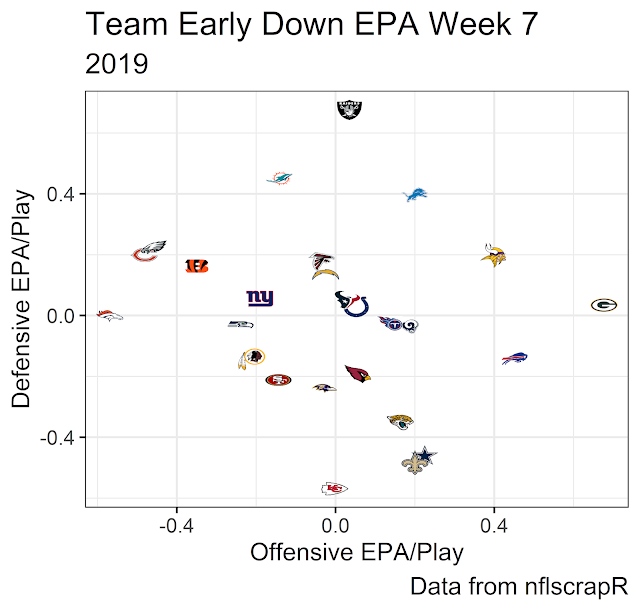 Not too much more to glean from here. Looking at the overall play, one might be surprised by the fact that the Jaguars were able to pull out that game against the Bengals. However, when you isolate early downs, we can see that there was actually a large disparity in the quality of play. If the Bengals were not so effective on third downs, this game would have been a rout. A similar phenomenon can be observed when looking at the Falcons game against the Rams. The Rams routed the Falcons and the Falcons were still more effective than they should have been in the non-garbage time portion of the game due to third down performance. I do not mean to shock anyone too much, but I think Dan Quinn's seat might be getting a bit toasty. The Raiders were also were buoyed on third down. The Packers were dominant but the Raiders were an unsustainable 7 for 11 on third down. Finally, I noted that the Dolphins, instead of looking like an atrocity, were merely bad against the Bills. But when filtering out third downs, the gap between the two teams was substantial. The Bills offense was moving the ball with ease on early downs, but converted just 3 of 10 third downs against this awful Dolphins defense.
Posted by CarmenC at 8:54 AM