We know that pitchers have some sort of control over their ground ball rates. We also know two-seamers and sinkers (often thought of as the same pitch) tend to induce ground balls. Noted relief maestros such as Zack Britton, Jordan Hicks, and Taylor Rogers have been some of the most successful relief pitchers in MLB on the back of their respective sinkers. Similarly, pitchers such as Dallas Keuchel, Luis Castillo, and Marcus Stroman have leveraged their sinking fastballs to achieve a great deal of pitching notoriety.

In general, if a pitcher has a mix that features a heavy dose of sinkers and two-seamers, we accept that those pitchers are looking to get outs via the ground ball (as opposed to those who use high spin four-seamers and breaking pitches looking to induce strikeouts). But this sort of analysis seems a bit too black and white for my taste. As a result, I wanted to look and see if there was any way to look at a particular pitch and predict if that pitch will induce a ground ball. If I could predict the chance of a single pitch being a ground ball, then I could also look at a single pitcher's pitches and predict his ground ball rate based purely on the types of pitches he throws and where he throws his pitches.

I created a generalized linear model with the following parameters: horizontal pitch location, vertical pitch location, horizontal pitch movement, vertical pitch movement and pitch speed. I then regressed these variables against whether or not the pitch at hand generated a ground ball. I filtered the Statcast data by choosing only pitches that resulted in batted ball events, and trained the model on a sample of about 27,000 pitches from the 2019 season. I then tested the data on the rest of the batted balls from the 2019 regular season. Here are the overall results of the model: 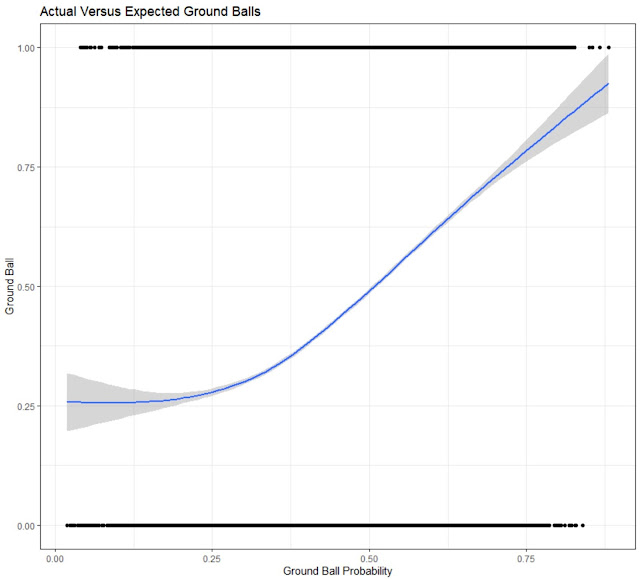 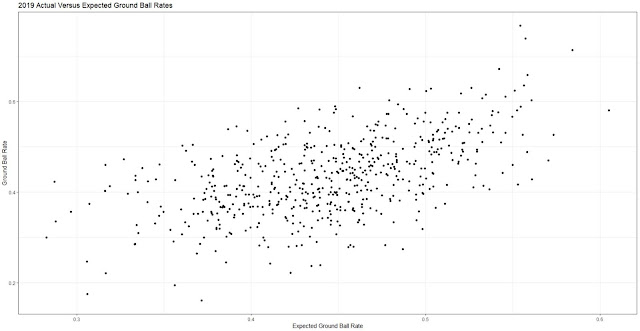 This relationship yields a coefficient of determination (the r-squared value) of .3052. Definitely not a totally robust fit, but I still think it can tell us something about a hurler's pitch-by-pitch tendencies. Furthermore, I looked into which pitchers over-performed and under-performed their expected ground ball rates over the course of the season. Here are the over-performers: 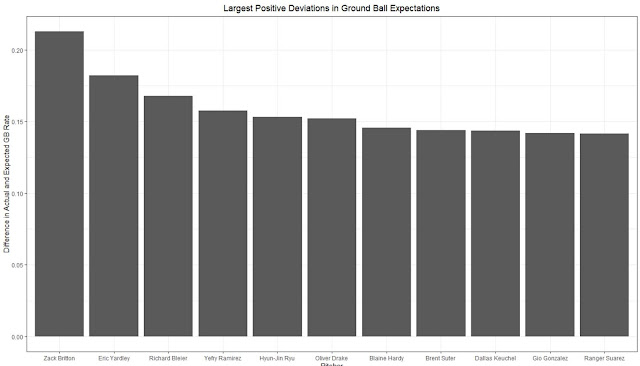 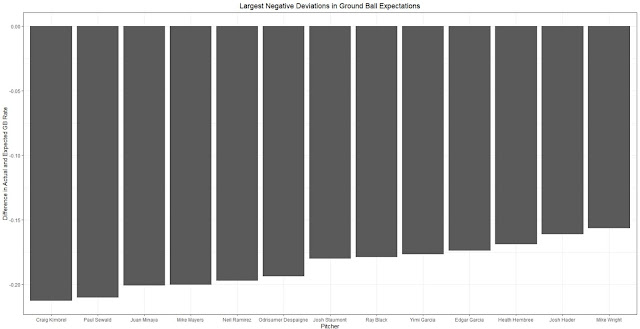 Craig Kimbrel had a horrid season and his batted ball tendencies allowed is definitely one of the aspects of his performance to blame. Josh Hader, one of the most dominant pitchers in the sport, also shows up. Getting ground balls can help a pitcher be successful, but if a pitcher can keep many batted balls from being put in play, he can still be prolific, as Hader shows.

This is obviously an imperfect way to evaluate pitchers. For one, pitchers do not have total control of their allowed batted ball tendencies. Also, the fit between expected ground balls and actual ground balls is not perfect. However, I think this can be a useful jumping off point for public analysts to try to refine their approach in looking at pitcher ground ball tendencies.

Below is table with all of my results. Feel free to poke around and look for your favorite players: