Let's dive into week 8 (not including Monday night): 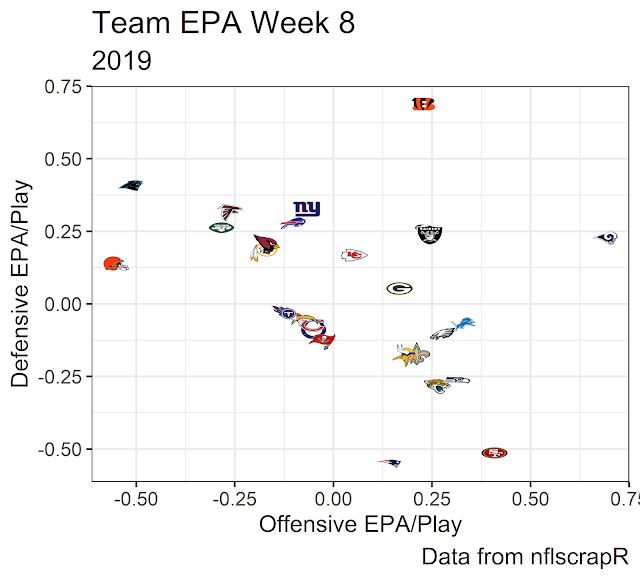 San Francisco was the most impressive team of the week in its domination of the Panthers. The Jaguars (against the lowly Jets), Seattle (against the Falcons), New England (against Cleveland after a monsoon in the Northeast), Minnesota (against Washington) and New Orleans (against the Cardinals) all took care of business against much inferior opponents. The Eagles also thoroughly outplayed the Bills. The Rams offense was dynamite against the carcass that is the Bengals, however Cincinnati was still able to move the ball themselves with solid efficiency. Not the best look from Wade Phillips and co. The following games were as close as can be and simultaneously terrible: Chargers versus Chicago, Tampa Bay versus the Titans, and Broncos versus the Colts. Given the Colts aspirations as an AFC wild card, this showing was a bit disappointing. Here are the early down team efficiencies from this week: 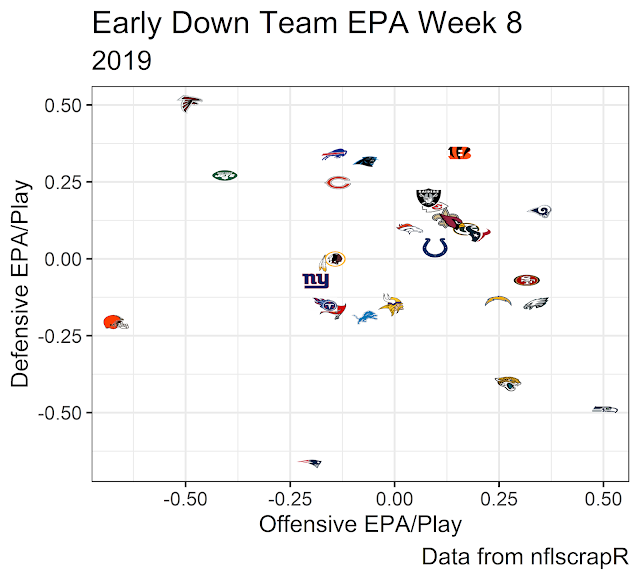 Seattle and Jacksonville really put the boots to the Jets and Falcons respectively. The Patriots and Browns clunker does not show out here, but a lot of that can be contributed to the aforementioned terrible weather. The Lions and Giants game looks a lot closer upon further inspection. Both teams struggled offensively on early downs and played better on third downs. Given the state of Giants defensive depth chart, this should not have been an extremely satisfying performance for the Lions. The Washington and Minnesota game also looks a bit closer when isolating early down performance. Given actual length of the game, once Minnesota went up early, Mike Zimmer really took his foot off the gas and Bill Callahan did nothing to take advantage. Despite trailing the entire game (bad weather aside), Washington only attempted 21 passes. 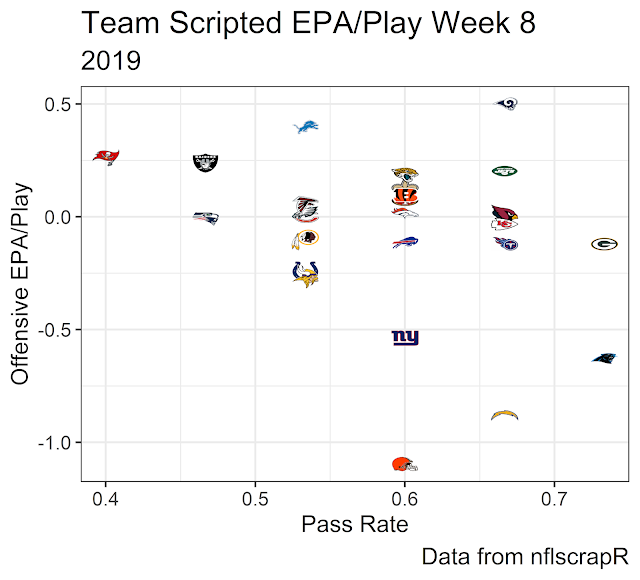 Given Cleveland's early turnovers, it is not surprising in the slightest to see them at the bottom. But losing more than a point per play to open up the game? Amazing work. The Jets actually looked solid to start the game. Given the final differential in expected points, their start faded quickly. The Lions started out strong against the Giants, while their opponents could not reciprocate. It really seemed like that game could have been a lot closer if the Giants showed up at the start. The Chargers were dreadful on their scripted plays, almost as bad as the Browns. But they went into Chicago and actually won the game. I guess the gravity of Mitch Trubisky pulled them back into the contest. Chicago, having hemorrhaged draft picks the last two seasons, is in for a rude awakening these next couple of seasons.
Posted by CarmenC at 8:53 AM