As any baseball fan with a pulse knows, Gerrit Cole is set to cash in this off-season. He will probably sign off on the largest free agent contract for a pitcher in league history. While we can all wait and guess where he is going to go and for how much, I figured the conclusion of the World Series would be a great time to project how much he will be worth on the mound over the life of his contract.

When assessing Cole's value (as a pitcher), I assumed that he would sign an eight year contract. Next season will be his age 29 season, so an eight year deal that takes him through his age 36 season seemed reasonable given his pitching prowess and the state of the free agent market (news flash: teams are becoming increasingly weary of handing out long-term deals through a player's 30's).

In order to project his value over the life of the contract, we need to estimate Cole's true talent as a pitcher right now and then apply some sort of technique to reflect aging season over season. First, to get an approximation of  Cole's true talent right now, I took a weighted average using the weights from Tom Tango's Marcel projection model (five for this past season, four for the season before, and three for the season before that). Using FanGraphs WAR, Cole's "true talent" right now is a shade under six wins (5.93 to be exact).

Once I obtained this value, I applied a projected change in WAR for each of the eight seasons. While somewhat arbitrary, I considered changes in performance in line with the results of more rigorous  studies into aging players. I considered a -.25 WAR drop off in his age 29 season, -.5 WAR for ages 30, 31, 32, 33, and 34, and -.75 for ages 35 and 36. However, I also wanted to get a range of outcomes within each projected year-to-year decline. So for each season, I created a random normally distributed set of numbers with a mean of the deltas I described above and a standard deviation of one. Each year I pulled out the fifth, twenty-fifth, fiftieth, seventy-fifth, and ninety-fifth percentile deltas and added those to Cole's true talent figure. This would provide a distribution of outcomes for Cole's value to whatever team signs him. I then summed up the WAR values in each case and multiplied them by 9, 9.5, and 10 which represents estimates for the cost of a win on the free agent market. Here are the results: 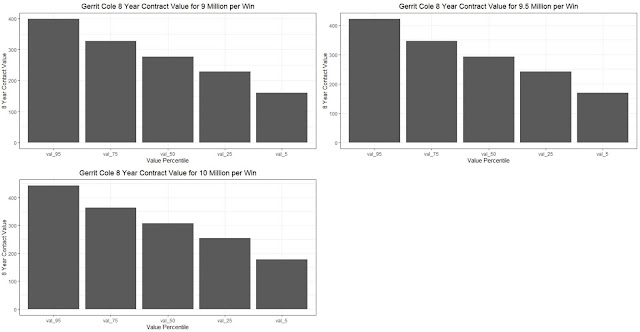 For more specificity, here are the actual figures:

In close to the reasonable best-case scenario, Cole is projected to be worth a bit over 400 million dollars by my methodology. Correspondingly, in about the worst-case scenario, he figures to be worth about 170 million. Now, it is most important to look at the fiftieth percentile outcome, which is supposed to represent what a team should be realistically expecting from Cole. His value in this case would be about 300 million over the course of an eight year contract.

Now, given the state of the free agent market, I would be surprised if Cole signed for 300 million dollars. So what can we conclude about whatever team signs Cole? That team is probably getting an excellent pitcher on a bit of a discount.