I was looking at the play-by-play data of all the UConn games through today (11/24 against Miami Fl.) and I noticed what I thought was an odd trend: 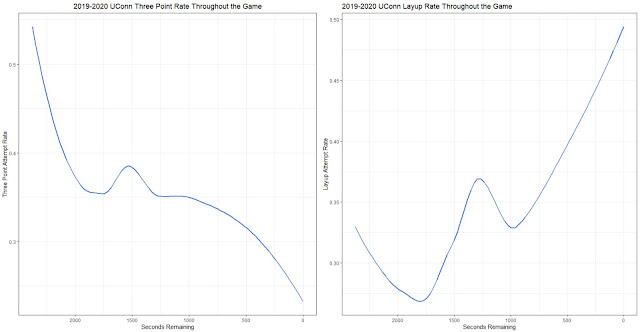 I filtered out garbage time (win probability between 15 and 85 percent) when looking at this data. Anecdotally I would think the trend would be the reverse; as the game goes on the defense makes more of an effort to wall off the paint. However, as the game has gone on for the Huskies thus far, they have dramatically decreased the rate of three pointers taken. This can be attributed somewhat to what seems like more post-ups for Josh Carlton in close games (to my chagrin) and taking the ball out of the guards hands more than what would be ideal. Here are who has taken the shots in the last five minutes of the game: 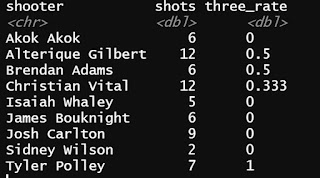 Now, it's worth noting, this extremely small sample of last five minute shots does not give this much predictive value. But the team's shot profile overall as a function of time thus far I thought was worth noting. It will be interesting to take a look at this in a few months.

Thanks to Luke Benz for making it easy to scrape the play-by-play data
Posted by CarmenC at 2:39 PM