The following table represents the shot profiles of all the relevant players in the UConn rotation: 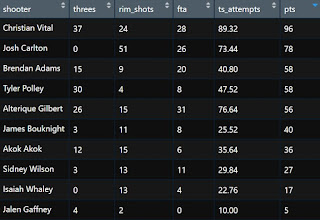 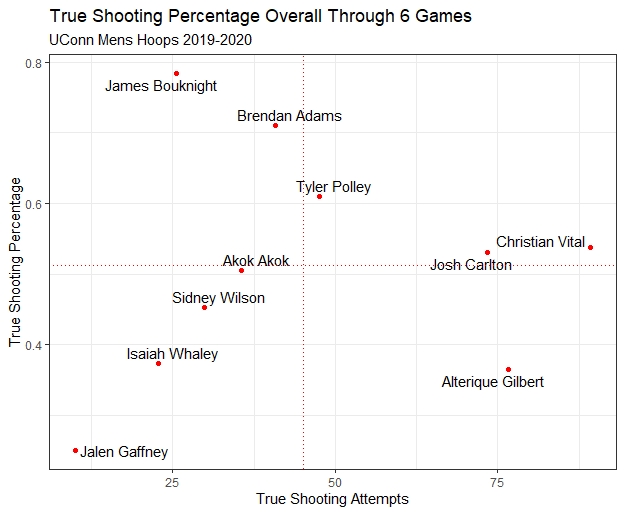 The horizontal and vertical lines represent the averages in efficiency and volume respectively. You can see that with his high volume, Gilbert has not been efficient shooting the ball thus far. Now, this will regress some, a 36.5% true shooting is not sustainable for a player of his capability. This also neglects to account for the shots he has created after drives to the rim, where he has the ability to blow by defenders with his elite quickness. Polley has maintained very good efficiency with his proficiency from three point range. James Bouknight has only played in three games (hence the low volume) but has shot the lights out thus far. The same can be said for Brendan Adams after a poor freshman year. Vital has maintained solid efficiency despite the degree of difficulty of his shooting attempts. Carlton's similar efficiency to Vital is disappointing when you take into account the proximity to the basket with which he takes his shots and the fact that many of his attempts are assisted. Sid Wilson's lack of offensive production has to be considered a let down given his recruiting pedigree. If he can at least become a passable shooter with his athleticism, he could be a really important piece for this UConn team. Finally, here is the same plot but for just the last 10 minutes of games: 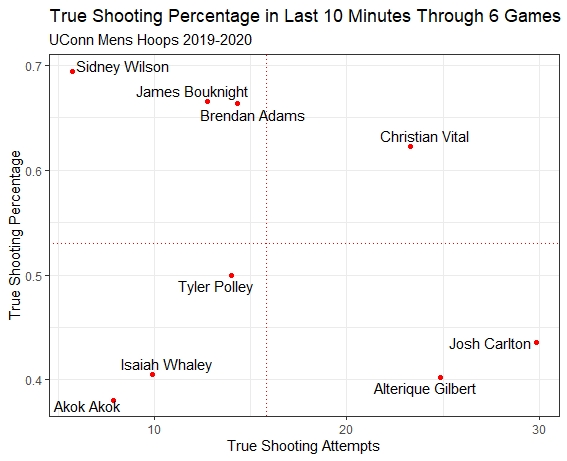 This information should be taken with an extremely sizable grain of salt, given the lack of game time in this split. Bouknight and Adams have shot extremely well at the end of games. Given they are both perimeter based players, this will regress some. Vital has taken his game to another level during this time. Carlton and Gilbert lead the team in volume at the end of games, yet they have been two of the least efficient players in this spot. I would imagine the two of them will have a little more luck finding the bottom of the basket as the season goes on.

Thank you to Luke Benz and his ncaahoopR package for making it easy to scrape the play-by-play data
Posted by CarmenC at 3:07 PM