As UConn gets set to take on the Indiana Hoosiers at Madison Square Garden, I thought it would be interesting to look at the team's shot profile thus far to see where possible improvements could be made. As I am wont to do, I parsed through the play-by-play data and classified shots based on when they the occurred after the given possession started. To make things more simple, I removed any shots that were preceded by an offensive rebound, because those shots happen quickly and muddy the waters when trying to look at shots taken in transition. Shots that were taken within seven seconds I considered transition and shots taken after 23 seconds I considered end of the shot clock. All other shots in between I considered part of the normal half court offense. First, I looked at the splits separated by offense and defense:

Note pps stands for points per shot attempt. As one could imagine, shots in transition are much more efficient than any shot due to the lack of mid range shots. Within basketball analysis, it is also accepted that shots at the end of the shot clock are generally less efficient. Oddly enough UConn thus far has been slightly more efficient on shots at the end of the shot clock. I would not expect this to continue as the sample of shots grows. The following bar chart compares the offensive and defensive efficiencies on all shots split by when they occur during the shot clock: 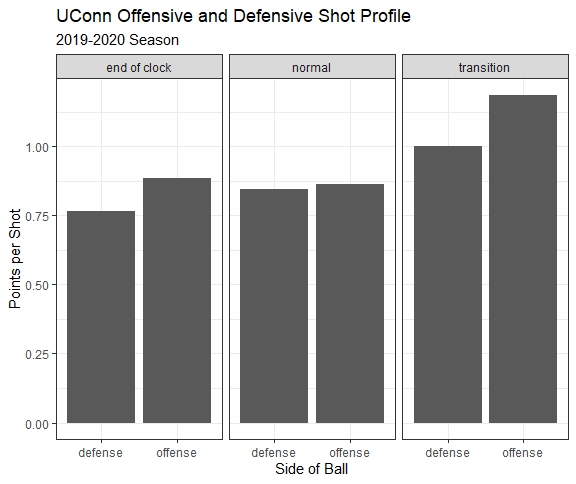 UConn has a huge advantage in transition efficiency thus far. Given the team is only 156th in adjusted tempo thus far (per barttorvik) I would hope that coach Dan Hurley urges his team to push the pace more. The defense at the end of the shot clock thus far has been nails. The one worrisome trend, however, is how the team is barely breaking even in the "normal" split, which comprises the bulk of the total shooting possessions. If this team has tournament aspirations, it needs to separate itself from the opposition for the most important aspect of the game. Without the large margins in the two more sample-sensitive splits, UConn's record would be much worse thus far. 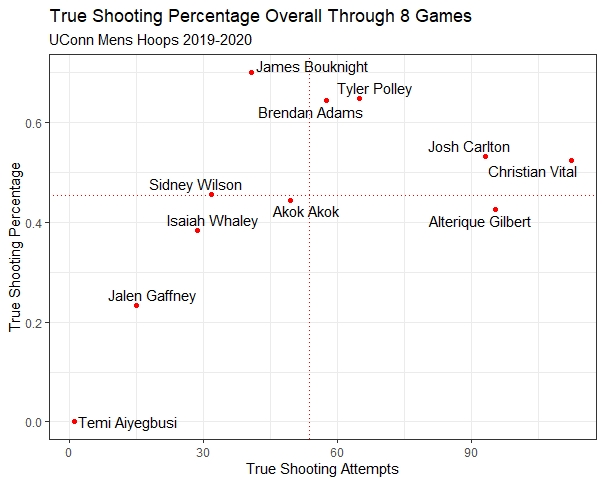 Gilbert is trending up as the season goes along, which is not surprisingly in the slightest given his unsustainable rough start shooting the ball. Vital and Carlton are also trending up a bit, while Brendan Adams has cooled off after a scorching start. Bouknight and Polley continue to shoot a hot ball, Bouknight mostly by means of getting easy put-back opportunities and Polley through his steady diet of threes. Overall, the three most heavily used players are starting to pick up their efficiency, which, hopefully, is a good omen for the team as it prepares to take on a solid Hoosiers squad.