Recently I looked at aging curves in the NHL. In my last couple of posts, I used the delta method to determine how forward skills age and how overall player value changes. Now, I am moving to baseball and, more specifically, exit velocity aging curves from the Statcast data. Since 2015, MLBAM has made some of the data recorded by TrackMan (and in the future Hawk-Eye) available to the public through its website Baseball Savant.

I wanted to see how hitter batted ball profiles aged, so I pulled a few batted ball metrics from the leader-boards and developed an aging pattern. In this study, I weighted each delta by the average number of batted balls between two player seasons. 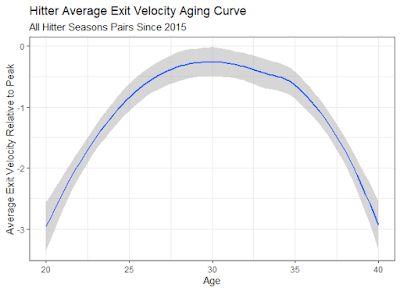 Age, to reiterate the point I made in my first aging curve post, is the second age in a given bucket. So age 24 on the chart corresponds to the delta between age 23 and age 24. The peak is a bit later than I expected, given our understanding that generally peak performance generally occurs somewhere between age 24 and 27. Maybe average exit velocity over a season is not a good indicator of whether or not that season was successful, relative to that player's ability. Let us now look at how maximum exit velocity ages: 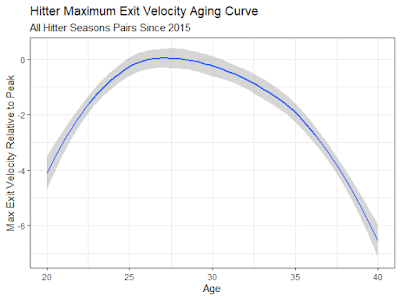 This is more in line with the traditional aging curve for player performance. For the sake of easy comparison, I put the maximum and average exit velocity curves on the same chart, along with average line-drive/fly-ball exit velocity. 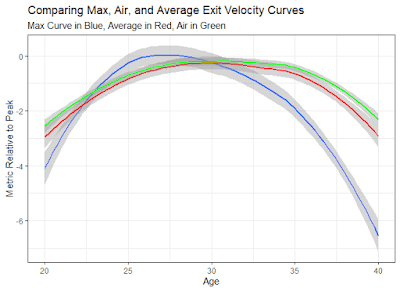