This is a continuation of my study into NHL player aging patterns. In my last post I introduced aging curves and applied the concept to forward scoring and shot rates. Now I am going to apply the concept to Evolving Hockey's goals above replacement metric, which is a regression based statistic meant to capture a player's value in one single figure. It is composed of even strength and special teams contributions on both offense and defense and penalty differential (penalties drawn versus penalties taken). I used the same delta method I described in the last aging curves post and this time I looked at the aging patterns for forwards, defensemen, and goaltenders, the latter of which a separate GAR model applies. Instead of using total GAR, I used GAR per 60 minutes to avoid the issues associated with comparing and analyzing players based on cumulative metrics. Metrics where value is accumulated are affected by circumstances outside of a player's control (mainly, the coach deciding how much he is going to play). Thus, to remedy the issue and try to isolate skill, I looked at the rates at which each skater accumulated GAR. First, here are the aging curves for skaters for the three main components of GAR: 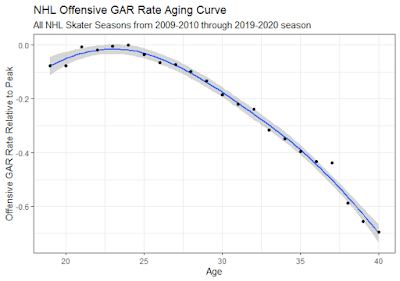 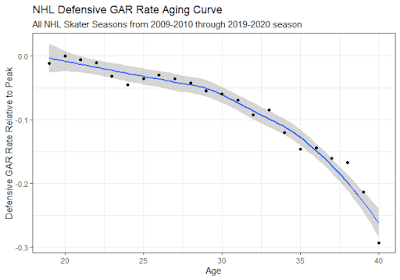 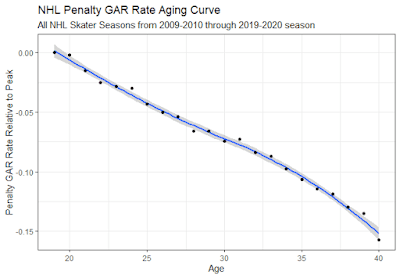 Skater offense peaks early. It only takes about a couple of years for skaters to reach their peak offensive value and once they reach that peak, they start a relatively slow decline until their late 20s where that decline hastens. Defensive value seems to be at its peak basically right when skaters enter the league but declines much slower than offensive value. Value derived from drawing and avoiding taking penalties declines sharply the moment players enter the league. I believe this can be attributed to the idea that drawing penalties is mainly a product of a player's speed and physicality overwhelming opposing defenders, both attributes that are basically in decline the moment a player steps on the ice at the NHL level. When putting these components together and weighting them appropriately, one can yield a total GAR rate. Here is the GAR rate aging curve for all skaters: 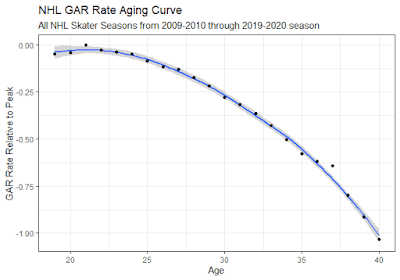 Unsurprisingly players peak early in their careers and decline slowly into their late 20s followed by a more rapid decline. Here are GAR rate curves split by forwards and defensemen: 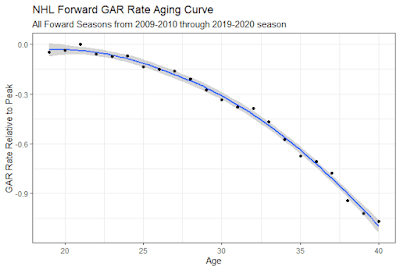 Defenseman retain their value a bit longer than their forward counterparts. Given that offensive and penalty drawing value peak earlier than defense, it is not too surprising that defenseman maintain their value longer when coming into the league because the former two skills are more important to being a productive forward.

Finally, I created a goaltender GAR rate curve. This comes with the disclaimer that "goalies are voodoo" and both NHL teams and public analysts alike have always had trouble gauging the value of a given goaltender. With that being said, using Evolving Hockey's attempt at quantifying the value of a goaltender, here is how goalie value ages: 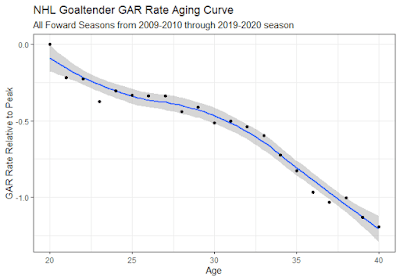 Goaltenders basically begin to decline the moment they step into an NHL crease. Even with the uncertainty of valuing goaltenders, maybe teams should not be signing 30 year-old goaltenders to massive free agent contracts and long-term extensions. Just a thought and something to keep in mind with Braden Holtby and Jacob Markstrom hitting the free agent market at the conclusion of the Stanley Cup Playoffs.
Posted by CarmenC at 1:27 PM