Can Players Drive Goals Above Expected?

The main pillar of hockey analysis in the year 2020 expected goals, a concept first introduced in soccer and one that eventually made its way over to hockey. Expected goals attempts to gauge the probability that a shot attempt finds the back of the net. A shot attempt with an expected goal value of 0.09 should be expected to be converted 9% of the time, assuming that the expected goals model is well calibrated. The driving forces behind all expected goal models are the x and y coordinates of the shot attempt, which can be found in the play-by-play data from the NHL API. This should be intuitive, the closer a shot is to both the goal line and the center of the ice, the greater the chance that shot will be converted. Now, the shot coordinates are not the only couple of variables. Analysts, such as those at Evolving-Hockey, MoneyPuck, and Natural Stat Trick have incorporated variables such as the handedness of the shooter, the time between successive shots, how long players have been on the ice, etc. I would going to this link and reading about the model at Evolving-Hockey for some more background. Included in that write-up is a short history of expected goal models.

The premise of using expected goals to evaluate players is that players do not have too much control over either their individual shooting percentage, their teammates shooting percentage, and their on-ice save percentage. This is not totally true (forwards, especially compared to defenseman, have some control over the two former figures. With that being said, these percentages should be heavily regressed towards the mean), but mostly true, so knowing where the shots are coming from and the nature of the shots should be more valuable than either goals for and against or even just shot attempts for an against.

Now, as I alluded to above, there is some evidence that players can some, albeit little, ownership over some of the percentages that are mainly chalked up to luck in hockey analyst circles. The analysts over at MoneyPuck have done work to gauge shooting talent using goals above expectation and Bayesian statistics. I wanted to see if I could find any signal in on-ice goals above expectation. To do so, I looked at the the differences between actual and expected goal Regularized Adjusted Plus-Minus (RAPM), which can be found at Evolving-Hockey. RAPM is derived from linear regression, where the target variable (in our case goals and expected goals) is regressed against the skaters on the ice, the score and strength state, zone starts, whether or not the offensive team played a back-to-back, and whether or not the offensive team was the home team. RAPM looks to isolate each players individual impact on his team's target variable differential.

For my analysis, the variable of interest was the difference between actual and expected goal RAPM per 60 minutes of even strength play, which I will refer to as RAPM delta for the remainder of the post. The idea is to figure out whether differences in the two RAPM figures can be considered meaningful for a player and then contribute that difference to the ability to drive goals by means of skills not captured in expected goals (mainly by individual shooting talent and buoying teammate shooting talent). 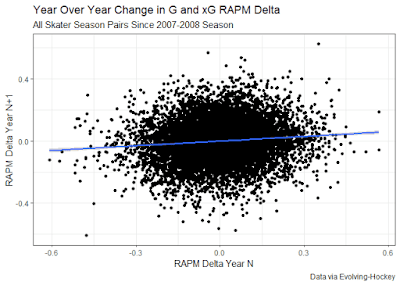 This is almost completely noise. With weights corresponding to the average time on ice between the two seasons in the pair, this yields an R-squared of about 0.01. As I alluded to above, deviations from the mean in shooting talent or on-ice percentages need to be regressed heavily towards the mean, even for multi-year samples. So the fact that RAPM delta in year N effectively does not explain anything about RAPM delta in year N+1 is not surprising. To account for the need of a heavy dose of regression, I put together a similar linear regression, but instead of using years N and N+1 weighted by average time on ice, I used career RAPM delta up to year N and RAPM delta in year N, weighted by career time on ice up to year N. 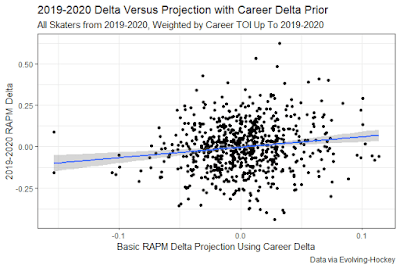 There are less data points here because I am just looking at non-rookie skaters from the 2019-2020. Surprisingly, there is not much more signal here compared to when I looked at just prior year RAPM delta. This regression yielded an R-squared of about 0.027, still almost entirely noise.

My last resort was to look at all of the players in my data set. I created a model where the target variable was RAPM delta. Instead of using any prior RAPM deltas, however, I created a series of dummy variables for each player with a season pair in the data set and regressed all of these variables (1645 in total) against RAPM delta. 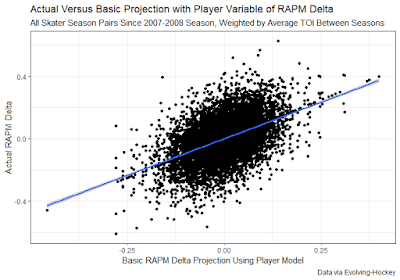 Now we see some signal. This regression resulted in a R-squared of 0.2458, a much stronger correlation than the previous two models. The coefficients in front of each dummy variable represent the estimated effect of each player on goals above expectation per 60 minutes. The following is the distribution of those coefficients: 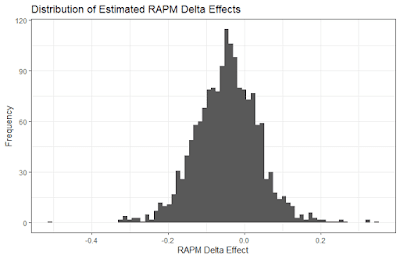 The distribution looks normal, as was expected. The fact that it is centered at about -0.05 goals per 60 minutes can be attributed to expected goals slightly underestimating actual goals.

So, there appears to be some merit to players being able to drive on ice goals above expected. Given the research done on player shooting talent over at MoneyPuck, I think this type of behavior can manifest itself at the on-ice level, but probably not as strongly as on the individual level (given the confluence of variables at the on-ice level). The next step would be to try to nail down an accurate figure or reasonable possible distribution of figures for each individual player.

I will leave you with a table with some estimates of player RAPM delta (i.e. the coefficients from the regression). I took the top 10 and bottom ten RAPM delta impacts for players who played at least 1,000 even strength minutes this year. I would take these with a heavy grain of salt, there is still not an especially strong correlation between the model predictions and actual results and I did no further regression to the mean for the uncertainty of players who do not have a lot of career minutes. 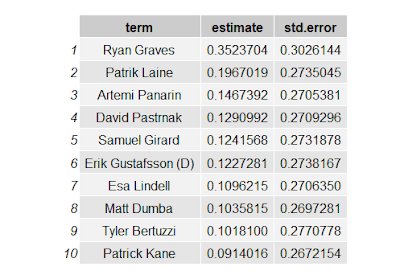 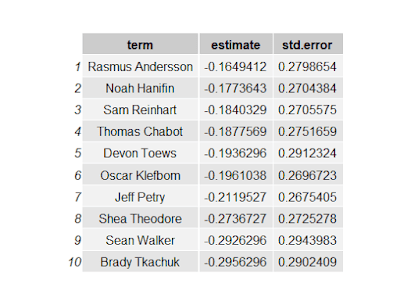