What's Next for Chris Archer

The trade and struggles of Chris Archer have been well documented by the baseball community. As many patrons of this very website know, Archer was traded from the Rays to the Pirates at the 2018 trade deadline for Austin Meadows, Tyler Glasnow, and a player to be named later, who was later revealed as Shane Baz. Both Meadows and Glasnow have been very productive at the major league level for the Rays, while Baz is FanGraph's 63rd rated prospect on THE BOARD carrying a future value of 50. Archer, on the other hand, has been an unmitigated disaster. The once tantalizing strikeout artist has delivered a 5.01 ERA paired with a 5.05 FIP. He still has struck out batters at a 26.0% rate, but his walk rate with the Bucs has surged to 10.1%. The main culprit for Archer's spell of bad performance has been home runs; Archer has always tended to give up more fly balls than the average hurler, but since his move to Pittsburgh 19.6% of his fly balls have left the ball park, about 6% more than league average over that time span. Naturally, this leaves all of us baseball fans wondering, what happened to the pitcher who just four years ago was deemed by Dave Cameron as one of the 10 most valuable assets in MLB?

The Pirates were once thought of as one of the savviest organizations in baseball, a team that could spin washed up pitchers into innings-eating workhorses. Detailed in Travis Sawchik's book Big Data Baseball, the Pirates were one of the first teams to weaponize the infield shift. Pirates pitchers under the tutelage of pitching coach Ray Searage have been taught to rely on sinkers and two seamers and to induce ground balls that can be gobbled up by the shift. As hitters have adjusted to the shift and focused on putting balls in the air, the Pirates approach of tailing fastballs low in the strike zone has become outdated. What was once the fountain of youth for veteran pitchers has become the focus of ridicule from the more analytically inclined. The aforementioned Glasnow, Gerrit Cole, and Charlie Morton have all enjoyed upticks in performances upon their departures from the Steel City. Archer, as a member of the Rays, relied on a heavy diet of four seamers and sliders, the latter of which took the league by storm in 2015. Now as a member of the Pirates, Archer has traded out some of his four seamers and sliders for the two seamer, the pitch of choice for Ray Searage and the Pirates pitching staff.

Looking at the way Archer has sequenced his pitches thus far in 2019, we can see how detrimental this shift in philosophy has been. The following plot shows Archer's wOBA allowed for two pitch sequences he has used at least 50 times this season, where the first pitch is the final pitch in the sequence and the second pitch is the one that preceded it: 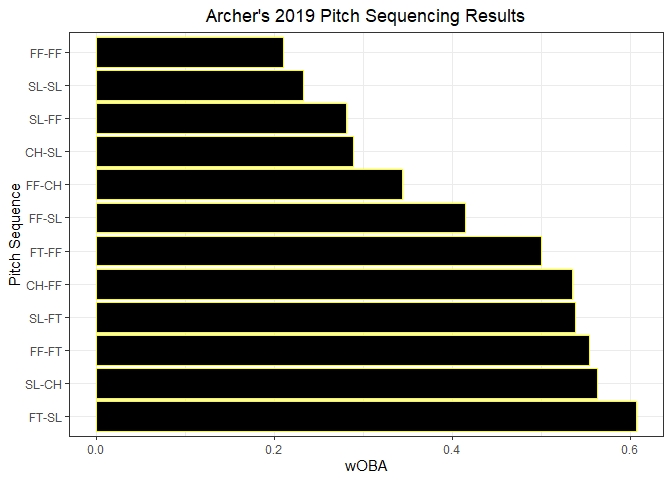 Archer's sequences that have resulted in the most damage all include his two seam fastball. His sequences with a wOBA allowed of less than .300 all involve his four seamer, slider, and changeup. Based on these results, its clear that he needs to get the two seamer out of the mix, or at least pull back the reigns on its usage. Looking at his start by start pitch mix, it is clear he has noted his two seamers lack of effectiveness and adjusted accordingly: 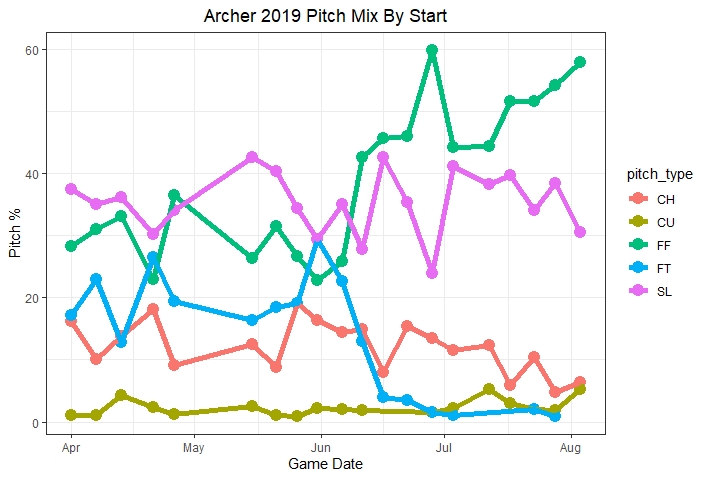 Archer has made the necessary adjustment and basically scrapped his worst pitch. Thus far, unfortunately, the corresponding results have not been there. He has a 5.03 ERA since the start of July, a similar output to the rest of his Pittsburgh tenure. If this reversion back to his Tampa Bay repertoire does not bear the fruit that made him once one of the most promising pitchers in the league, it might be time to close the chapter on Chris Archer as an usable Major League starting pitcher.

Pitch level data via Baseball Savant. All other data via FanGraphs and Baseball Reference.
Posted by CarmenC at 6:48 PM