How the Astros Can Fix Noah Syndergaard

With Noah Syndergaard trade rumors whirling around the baseball world, it is fair to ponder how a team who would acquire him could improve upon his 2019 results. To be clear, this incarnation of Syndergaard is still an excellent pitcher, but he still leaves us wanting more; Syndergaard has the physical profile and repertoire of a pitcher that teams dream about in their search for their next front-line starter. So how can he improve upon his already great season?

Look no further than his right-handed colleague, Gerrit Cole. When Cole was trade to the Astros, the baseball community expected that the Houston would be able to optimize Cole’s raw stuff to build one of the best pitchers in baseball. We expected the Astros would ditch his mediocre sinker and trade it for more breaking balls, Cole’s bread and butter. Sure enough, that was the case, and Cole has become one of the most dominant pitchers in the league: 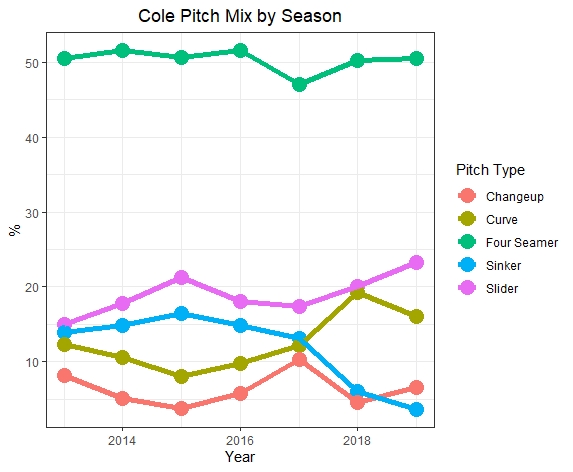 Let’s look under the hood at Syndergaard’s 2019 season. Here is a zone plot of all of his pitches this year: 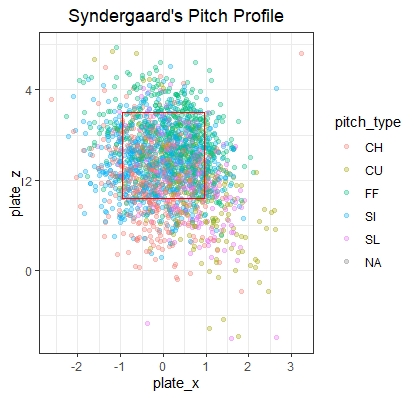 He is throwing his four-seam fastball up in the zone and his breaking pitches and changeup down in the zone. That is all fine and well, but looking at the plot, he is leaving a lot of sinkers in the middle of the plate. Batters have a .381 wOBA on his sinker, per Baseball Savant. It is possible that he needs to scrap it. Now, looking at his pitch mix and results, we see how poor his sinker is performing versus his other offerings and how often he is throwing them: 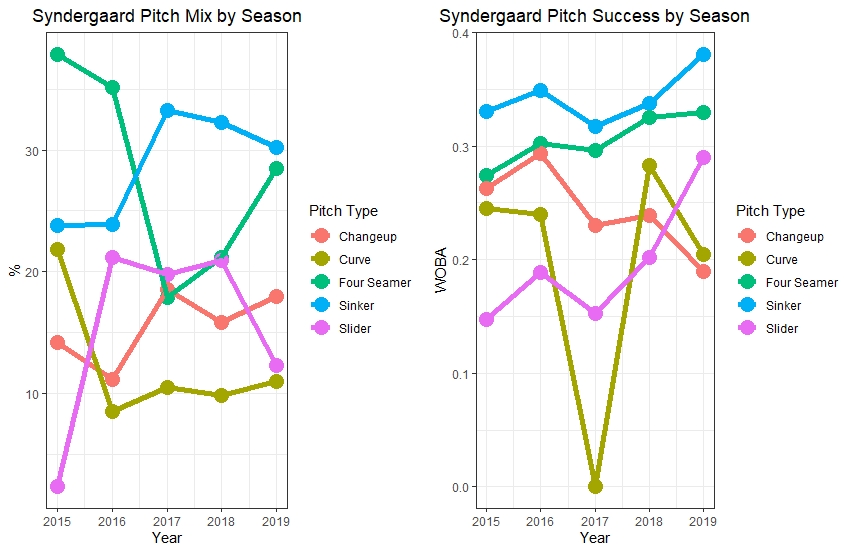 As I said, he is throwing way too many sinkers. Considering the Astros are presumably one of the clubs vying for Syndergaard’s services, I wanted to see how his results would change if he adopted Cole’s pitch mix. From Baseball Savant, I took his wOBA allowed by all of his pitch types and then multiplied those values by Cole’s 2019 pitch percentages, essentially taking a weighted average of Syndergaard’s average results. This may not be an extremely accurate measurement of how he would perform, but it is worth looking at. The result was a .293 wOBA, a figure that would improve his current .308 wOBA by about 5%.

While this hypothetical change in pitch mix would not yield extremely different results, it is still an improvement nonetheless. For a club such as Houston that is vying for a World Series championship, those incremental gains matter. With a division title all but wrapped up, the Astros can afford to look ahead to the playoffs. While the brevity of the postseason does not often reward the best clubs, the Astros should be confident that the addition of an improved Syndergaard can supply that small edge that might put them over the top. A top three of Justin Verlander, Cole, and Syndergaard would be the most fearsome trio of starting pitchers in recent memory and would solidify the Astros’ status as the favorite in the American League.

This post appeared at FanGraphs before the trade deadline

Pitch level data via Baseball Savant. All other data via FanGraphs