Anybody who pays attention to statistics and data-driven decision making in the NFL knows that coaches are woefully conservative. We all bemoan the fact that coaches make decisions out of fear of losing, as opposed to making to appropriately aggressive decisions to win football games. Each decision in a vacuum might not seem like a big deal; individually these decisions often swing a team's win probability by no more than 5%. Now, the leverage increases as the scoring margin and time remaining in the game decrease, but nevertheless the bulk of the decisions seem inconsequential. However, when you look at the 4th down behavior of a team over the course of a season, those small, 5% decisions start to add up. Bundling these decisions together can add or subtract 1 or 2 wins to or from your total, the difference between making and missing the playoffs and getting a chance to make a run at the Super Bowl. So, let us look at 4th down plays and how they tend to add or subtract from a team's win probability.

The following plot shows the win probability added (WPA) on each fourth down play in the 2018 NFL season, sorted by whether or not the team with the ball went for it: 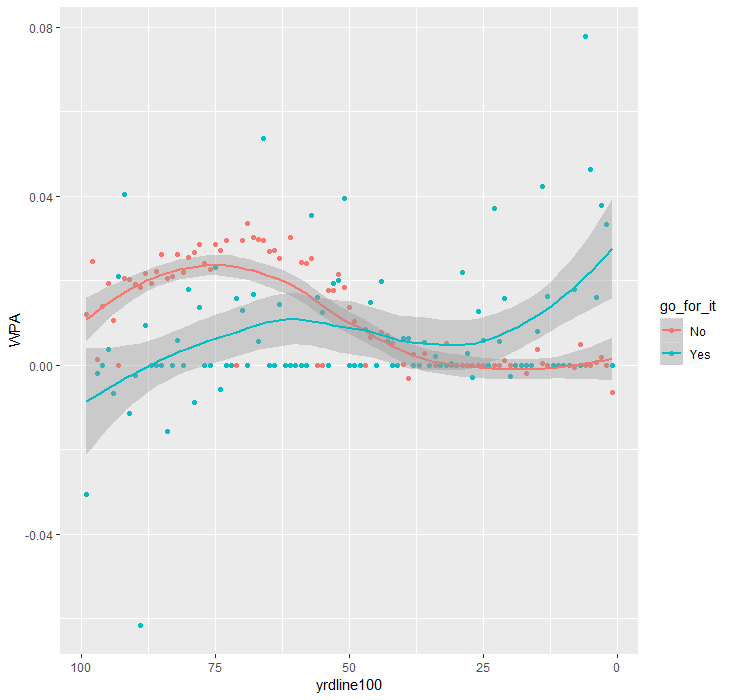 Based on this plot, there seems to be a break even point at about the 50 yard line. Once the offensive team enters its opponents side of the field, it should almost automatically got for it on fourth down. The problem with just looking at whether or not the offensive team went for it without any sort of context is that when the offensive team is on its own side of the field and its late in the game, unless it is close to the first down marker, the offense is forced to pass the ball on 4th and long. By not converting, your win probability is going to either stagnate or decrease in these late-game situations. Breaking it down by play type can give us an idea of how conceivable the fourth down conversion really is; if the offense is running the ball on fourth down, chances are the offense is close to the first down marker. So now, lets see that data based on play type: 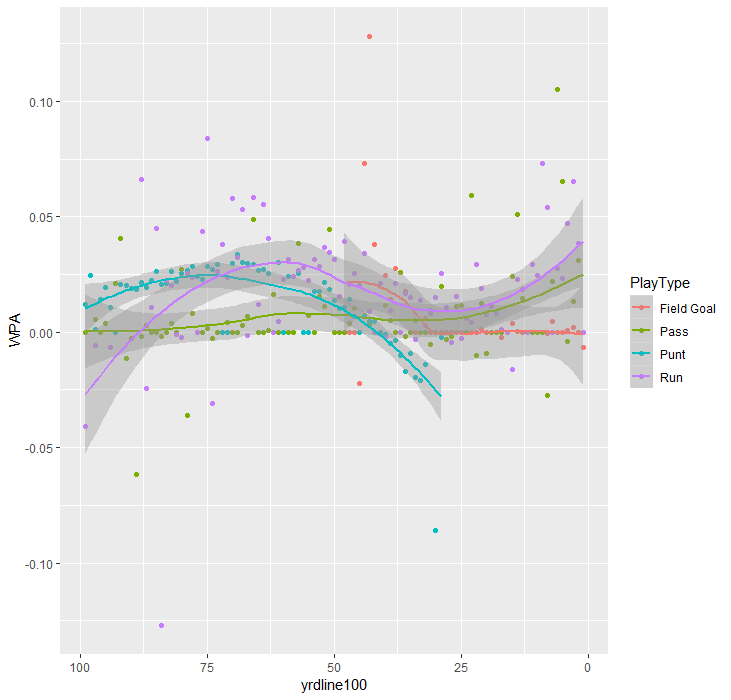 Now this is more interesting. At about the offense's own 25 yard line (75 yards from the end zone) running the ball on 4th down is almost always more lucrative than punting. And at about the opponent's thirty yard line, kicking a field goal offers almost no WPA in general and either passing or running the ball becomes a positive expected value play.

So what conclusions can we draw? First, if you are close to converting a first down, teams should be much more aggressive on 4th down at most points on the field, more specifically once they get past their own 25 yard line. Second, once inside the opponents 35 to 30 yard line, teams should automatically be going for it. Kicking a field goal and taking the 3 points does not increase the chance that the offensive team wins the game. In today's NFL, with its emphasis on calling defensive penalties, teams are scoring and moving the ball at historic rates. The best teams convert drives in the form of touchdowns. Getting close to the end zone and kicking a field goal does almost nothing. If coaches are looking to add wins on the margins, and for their own sake, keep their jobs by maximizing their teams potential, they need to start being more aggressive on fourth down. Coaches may think that by being conservative, they are minimizing their chance of losing. But looking at the data, they are doing the opposite. If coaches want to be successful and ultimately keep their jobs for as long as possible, they have to trust themselves and their staffs to draw up the right plays in these higher leverage situations to squeeze the most value out of their teams as possible.