After trying to estimate three point shooting with a few relatively simple statistics and a normally distributed generalized linear model in my previous post, I wanted to take a look at some more interesting players in regards to their three point volume and profile. Recently, Darryl Blackport, creator of pbpstats, posted a NBA tracking data scraper to his GitHub for public use and consumption. As a fan of all things data, I wanted to utilize this tool to identify noteworthy three point shooters in the 2019-20 season.

First I took a look at shots classified as catch-and-shoot opportunities that were either  "open" (four to six feet of space) or "wide open" (over six feet of open space). These are the shots, next to layups and dunks, that NBA teams are constantly trying to create every time down the floor (with a few possible exceptions). The league, on the whole, is shooting about 37.5% on these attempts, yielding a robust 1.12 points per shot attempt. The following plot represents the percent of each player's three point attempts that fall under this classification and each shooters accuracy on those attempts: 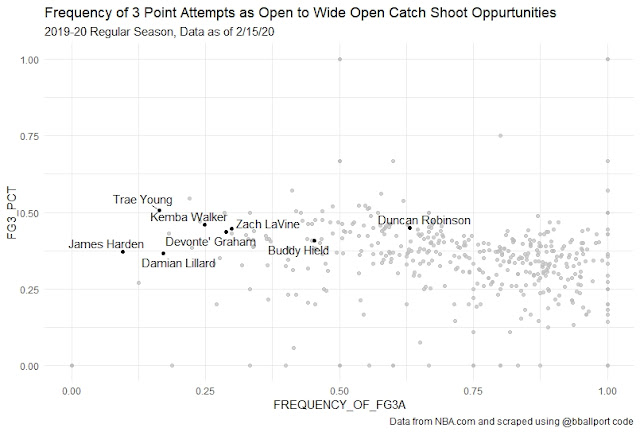 I highlighted the players who have taken over 400 three point shots overall thus far to get an idea of how often high volume three point shooters are attempting these positive expected value shots. Unsurprisingly, the most prolific three point gunners in the league do not take many of these shots relative to their overall shot profiles. Players like James Harden, Trae Young, and Damien Lillard are the primary shot creators on their teams; when they are not creating shots for their teammates they are often shooting off the dribble. One interesting player to note is Duncan Robinson, who played at Division III Williams College before transferring to Michigan and spent much of last season on Miami's G-League team. Despite shooting 420 three pointers thus far, a shade over 60% of his shots have been open catch-and-shoot looks. This sort of efficient shot profile, coupled with his volume, is unparalleled this season. Some credit should be allocated to the primary creators on Miami (Jimmy Butler and Goran Dragic) but much of Miami's excellent offensive production this season should be attributed to both Robinson's willingness to let it fly from beyond the arc and his success when doing so. 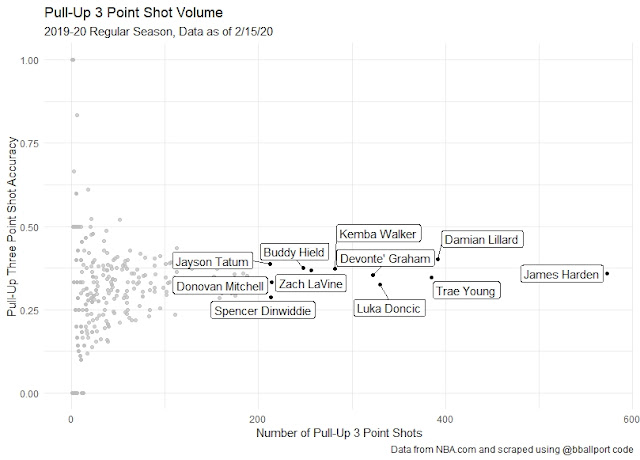 Even if you do not pay much attention to the NBA, it should be no surprise that James Harden, Damian Lillard, and Trae Young have taken the most pull-up three point shots. But the difference between Harden and his next closest competitor (Lillard) is staggering. Given Harden has one of the largest differences between his actual and expected three point percentage based on my model, this phenomenon is not very surprising. Spencer Dinwiddie has taken on much of the offensive burden as Brooklyn has been without Kyrie Irving for much of the season. Devonte Graham has grabbed control of the Hornets offense, taking 499 three pointers with 322 being of the pull-up variety. Given he was a second round pick just two years ago and Charlotte just handed Terry Rozier a massive three year deal, this has been one of the most surprising developments of the season. Jayson Tatum has also taken on a much larger offensive burden with the departure of Irving from Boston and has shot an impressive 38.67% on 212 pull-up three pointers. Given his aptitude on defense and proficiency as a shooter, I think it would be fair to expect Tatum to continue to thrive as arguably the best player on an excellent Celtics squad that will be in contention to win the Eastern Conference come playoff time.
Posted by CarmenC at 4:06 PM